Soft and chewy flapjacks, bursting with sweet and fresh apple and studded with juicy raisins. A little lighter and healthier than the classic, but just as delicious.

I am a big fan of occasional indulgence (and frequent indulgence for that matter), but I tend to shy away from flapjacks. Given the minimal ingredients involved, it makes it all the more obvious when both the quantity of sugar and butter vastly exceed the amount of oats. And while I have no issue in principle with oats being used to stick butter and sugar together, my arteries and blood sugar levels beg to differ.

So I spent my weekend, as I imagine most others do, considering how to make a flapjack that one could happily devour without fear of an early death. I had some cooking apples knocking about, and given that apple purée brings a bit of sweetness to the table and can also act as a fat replacer, I thought this might be the ideal addition. The result is deliciously fruity, and wonderfully moist and chewy – the apple gives the flapjack a lightness, while allowing it to retain a texture that would suggest that far more calories than are actually contained within.

How to make vegan apple flapjacks

The flapjacks themselves take a matter of minutes, but the apple purée is a little more time consuming. I used bramley apples, but you could use eating apples and add a little less sugar. Eating apples tend to hold their shape so will definitely require blending, but with bramley’s this isn’t completely essential. You can buy smooth apple purée in jars in most supermarkets if you’re looking for a shortcut.

Core your apples and chip them into small chunks. You don’t have to peel them unless you really want to – there’s loads of nutrients in the skins. Add a little sugar and a drop of water, and bring to a simmer in a saucepan, then put the lid on a leave to steam for 20 minutes over a medium-low heat.

After 20 minutes the apples should be fairly mushy. Leave them to cook uncovered for another 10–15 minutes, stirring frequently, so that some of the liquid evaporates. Leave to cool, then pop in a blender or food processor and whizz until smooth. If you have more purée than you need for the recipe, you can freeze it in ice cube trays, then use it in other recipes in the future.

For the flapjacks, put the sugar, golden syrup, and vegan butter in a saucepan and melt over a low heat. My preferred vegan butter is Naturli Vegan Block (it’s very buttery, organic and palm-oil free, but does contain nuts) but any vegan spread or coconut oil would also work.

For the oats, if you use rolled porridge oats then you can just measure these out and add the salt and cinnamon. I had jumbo oats, so pulsed them a couple of times in the food processor just to break some of them up, so the flapjacks cohere better, before adding the other ingredients. Pour in the melted butter and sugar and the apple purée, then stir everything together so you have a thick batter. Stir in the raisins (if using) until they’re evenly distributed. Spread in a even layer in a greased and base-lined cake tin or oven dish, somewhere around 20x20cm in area, then bake for 25-30 minutes until the edges are turning a dark golden brown and then centre is firm to the touch.

Leave to cool in the tin for 10 mins or so, the transfer to a wire rack to cool completely before cutting into slices. You should be able to get 12 decent sized flapjacks.

These are excellent at any time of day – they’d make a really great breakfast if you’re on the move or in a rush. You could add in a few chopped nuts or seeds, or some other dried fruit; cranberries, sultanas or dried blueberries would all be delicious. 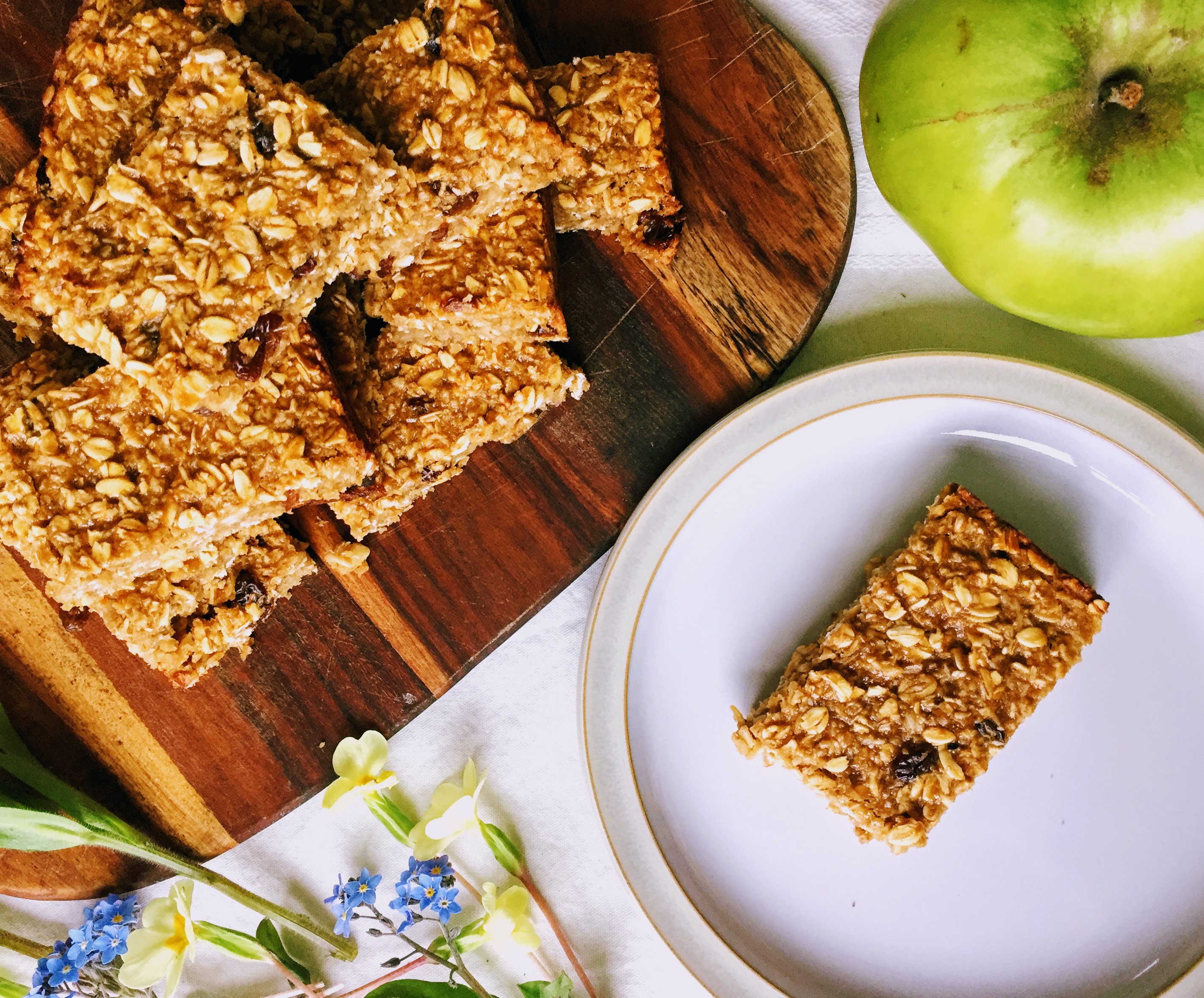 Soft and chewy flapjacks, bursting with sweet and fresh apple and studded with juicy raisins.

*You can also use eating apples but these don’t mush down as well so will definitely require blending. I’d also suggest reducing the sugar that you add to the apples during cooking – 1 tbsp should be enough. For a shortcut, you can buy smooth apple sauce from most supermarkets, and if this already has added sugar I wouldn’t add any extra at all. If you end up with more than 400g puree, you can freeze the excess for another time.