Swirls of soft, enriched bread layered with dark chocolate and a pecan and cinnamon crumb, finished with a sweet cinnamon glaze. Sweet, but not too sweet, crunchy, nutty, chocolatey, chewy and utterly delicious, this take on the Jewish classic is a labour of love, but time very well spent.

The first time I came across babka was about ten years ago – I saw a recipe by Nigel Slater in a weekend newspaper for a double chocolate version and I immediately had to try it. At this point, I had very little experience with bread, let alone making enriched dough, or indeed thinly layered enriched chocolate dough. The resulting loaf was a little under-proved and a bit raw in the middle, but I was enamored.

There is something deeply moreish about the slight sourness from the yeast mixed with the sweetness of the chocolate, and the added dimension of spice from the cinnamon filling. The texture is strange and magical; thin layers of chewy and buoyant bread threaded with veins of chocolate and crunchy crumbs (I think the Nigel Slater recipe used ryvita which you can use in place of nuts). When warm, you can sink your teeth right through a soft and yielding slice, and when cold, as I prefer it, the chocolate solidifies so you get little pockets of resistance embedded through the dough.

I made numerous versions of this when I was vegetarian, but in all honesty, I think my most successful attempt was when I adapted the recipe to be suitable for vegans. It looks like the sort of bake that would be complicated and amenable to disaster – indeed, I was inspired to share this recipe after babka was used for the technical challenge in bread week of Bake Off. However, I promise that with adequate instructions and the benefit of my many babka mishaps over the years, this baking behemoth is well within the reach of the most amateur of bakers.

An enriched dough is essentially one that has fat added to it – usually in the form of eggs, butter, or milk, and often sugar. Most standard babka recipes will contain all of these. This creates a bread that is soft, fluffy and flavoursome, sweeter and more buttery than a standard bread dough.

The milk is easily replaced with non-dairy milk. Any will do but I prefer using soya or oat as they generally have a higher fat content. The butter can be replaced like for like with Naturli Vegan Block (I mention this in almost every blog post but it’s honestly so good and I will continue to go on about it for free, although Naturli: if you would like to sponsor me I could do with the money, please hit me up), which is available in Sainsbury’s as well as some health food stores in the UK. If you can’t get hold of any then you can use a mixture of coconut oil and vegan spread – the coconut oil behaves more like butter and the vegan spread brings the flavour.

Instead of eggs, I’ve used aquafaba, which is the water you get in a can of chickpeas, or any other white bean. I could try to explain exactly why this works in place of eggs, but other than ‘it’s something to do with protein’ it wouldn’t be very illuminating. Safe to say, I tried it and it worked, and I tried it again and it worked, and that’s as much science as I am willing to deal with. Whenever I open a can of chickpeas, I reserve the water and freeze it in ice-cube trays, so if I ever need aquafaba for a recipe I can simply defrost the right amount. If you are opening a can especially, the chickpeas will keep in the fridge for about a week, and you can make hummous, or try my chickpea blondies or Indian potato cake recipe to use them up.

For the dough, you simply combine the non-dairy milk, melted and cooled butter and aquafaba, with flour, dried yeast, sugar, and salt. Mix until you have a sticky dough, then knead for 10-12 minutes. Don’t use too much flour when kneaded as the dough is meant to be a little sticky, and after 10 minutes or so you should have a dough that is smooth, shiny and still a little tacky. Place in a lightly oiled bowl, and leave to rise for 45 minutes. Knead again for a minute or two then return to the bowl and leave to rise until doubled in size (45 – 1 hour).

Babka originated in Jewish communities in Eastern Europe, as a way of using up extra Challah dough. Chocolate was not widely available so spiced fillings with dried fruit would have been more common. However I am generally of the opinion that if you can include chocolate, you probably should. I use dark chocolate with 70% cocoa solids, however you could use a dark chocolate with a lower cocoa percentage for a sweeter loaf. Sometimes I add a few squares of vegan white chocolate when I melt dark chocolate if I want a slightly sweeter, milkier taste (Sainsbury’s Free From white chocolate is excellent and exceptionally good value).

Roll the proved dough out into a square measuring roughly 50 x 50cm, and then drizzle the melted chocolate over the top, spreading it to form an even layer, with a couple of centimeters lip at both ends. You then need a little bit of crunch to sprinkle over the chocolate and I can imagine few things more delicious than a combination of nuts, cinnamon and sugar. For this recipe I use pecans, but hazelnuts, walnuts or almonds would work just as well. For a bit of extra crunch you can toast the nuts in a hot dry pan for a couple of minutes, ensuring they don’t burn, then let them cool, or use them raw. If you have a nut allergy you could use the same weight of ryvita or cracker of choice. Whizz in a food processor with a little sugar (I like demerara for the extra crunch) and some ground cinnamon and sprinkle over the melted chocolate.

A note of caution: while you don’t need to rush, it’s good to work reasonably quickly at this stage so the chocolate doesn’t completely set. In other words, don’t fanny about taking photos after every step as you will make life much more difficult for yourself.

The shaping is essential for getting the beautiful layers of bread and chocolate, but you don’t need professional skill or precision to achieve a really impressive-looking loaf.

First roll the chocolate-smothered dough into a sausage shape. Fold over the lip at the bottom, then carefully roll the dough up, as tightly as you can. Dab a little non-dairy milk on the lip at the top to secure the roll.

You then need to cut down the centre of the roll, lengthways, using a sharp knife, in order to expose the layers within.

Pull the top end of the braid down to meet the bottom end in a kind-of horse shoe shape, essentially folding the braid in half. Then twist the two halves together in the same way, right over left. You’ll probably only manage 2 twists and it might look a bit of a mess, but don’t worry, it’s all part of the process.

Your twisted dough should just about fit in a loaf tin, pre-prepared with grease and baking paper. I like to leave some extra baking paper hanging over the long edges of the tin as this make it much easier to lift the cooked loaf out at the end.

This then needs to be covered and left to double in size again – another 45 minutes to 1 hour. There have been times when the dough has ballooned and others where it has barely crept above the edge of the tin. It’s better to wait for it to reach about double the size rather than stick to the timings, but if after 75–80 minutes it’s still going nowhere fast, I would stick it in the oven anyway. Sometimes, if your dough layers are very thin, your loaf is unlikely to double in size without over-proving. Putting it in the oven before this milestone, if it’s been proving for a while, will still create a lovely loaf.

Before baking your babka, brush the top with a little soya milk. This will help it turn a lovely golden colour. Soya milk is preferable to other types of non-dairy milk for this particular task, as its higher protein content is what facilitates the browning, as with an egg wash. You could also use aquafaba, or even a little melted vegan butter or coconut oil.

Bake at 150C fan for 45–50 minutes. I’m going to level with you; it is virtually impossible to tell when a babka is cooked in the middle. You can stick a skewer in if you wish but it’s not going to tell you much. Obviously if it’s still wobbling then it’s not baked, but in that case you might want to check your oven or the quantities of ingredients you’ve used because after 45 minutes that really shouldn’t be the case. Essentially my method is this: if after 45 minutes, the babka is looking beautifully golden brown, to the point where I worry that it will be a bit too dark if I leave it in any longer, then I take it out. If it’s a nice golden brown, but could be a little darker, I leave it in for another 5 minutes. Either way, after this amount of time, it should be perfectly cooked in the middle.

Finally, to add that extra sheen of temptation, a really quick and easy glaze – I make this just before the babka is due out of the oven. Mix a little sugar and water in a saucepan, bring to the boil over a medium-high heat, then remove from the heat immediately. Stir in a pinch of cinnamon, and once the babka has been cooling in its tin for 10 minutes, brush the glaze over the top with a pastry brush.

Leave in the tin for another 10 minutes, then lift out, using the excess baking paper flaps, and place on a cooling rack to cool completely.

This is not a one-bowl and shove in the oven sort of deal, but I think it’s all the better for it. Babka is the perfect recipe for a lazy weekend or lock-down (in any tier); it requires time, but only sporadic bursts of activity, and the end result is deeply satisfying. Pick a few flowers from your mum’s garden without asking and you have a sweet treat that could have been made for Instagram (were it not for the fact that it’s been baked by Eastern European Jewish grandmothers for generations prior to the internet being a thing).

Please let me know if you give this a go! I have been so delighted to hear that people have been making my recipes (and enjoying them), and I really appreciate your feedback! You can comment below or find me on Instagram and Twitter @greedybearbakes. 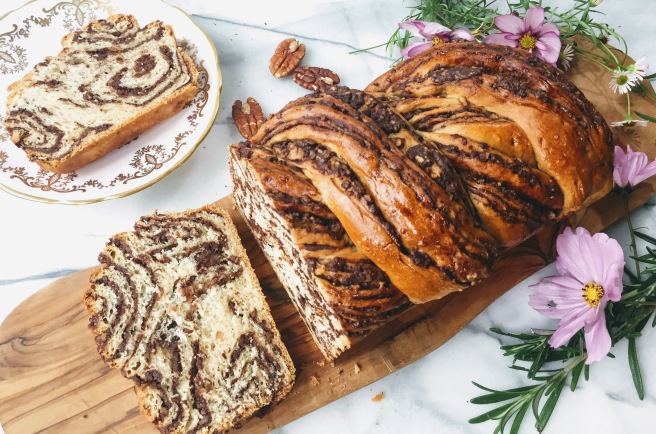 Swirls of soft, enriched bread layered with dark chocolate and a pecan and cinnamon crumb, finished with a sweet cinnamon glaze.

*The length of time the dough takes to prove will partly depend on your room temperature (warmer=quicker), however if you roll your dough too thin then it’s unlikely to double in size. If after 75–80 mins your dough is still nowhere near double, bake it anyway. It will be slightly less aerated but still delicious!