A twist on the Christmas classic; this mincemeat is bursting with fruit, fragranced with orange zest, spiced with cinnamon and nutmeg, and has a warming, boozy kick of whiskey. Perfect for mince pies, and an ideal foodie gift to impress your loved ones.

Mincemeat is steeped in British Christmas tradition, and I often wish I had a historic family recipe that had been secretly and lovingly handed down through the generations. Alas, the closest thing my family has is Robertson’s mincemeat, which is conveniently found pre-jarred in supermarkets.

However, this year I have endeavored to create my own recipe, and I think I might be on to a winner. I am aware that by sharing this I am forgoing the opportunity for it to become a closely guarded family secret for my non-existent children and my non-existent children’s children, but I am feeling generous. Must be the time of year.

Originally mincemeat would have contained actual meat, often beef, with dried fruits, spices and alcohol, and still many recipes call for beef suet, though vegetable works just as well. Nowadays, raisins, currants, sultanas and mixed peel are combined with sugar, apple, suet, lemon juice and zest, and spices, and either cooked gently to melt the sugar and fat before the brandy is added, or left to soak up the alcohol and develop flavour over the course of a day. There are loads of variations, for example adding dried cranberries or apricots, adding nuts, orange zest or different spirits such as rum and amaretto, but the end result should be fruity and fragrant, sweet and a little boozy, and dying to be encased in crumbly, buttery [vegan] pastry.

In this version, the key elements are all still there; dried fruit in abundance, plenty of fruity, spicy goodness, definitely boozy, and all in all about as festive as you can possibly get. However for something a little different I’ve added lots of orange zest and juice so the sweet, citrusy flavour really comes through, and swapped the brandy for whiskey. The result is kind of an ‘Old-fashioned’ inspired mincemeat (as in the cocktail), and there is absolutely no reason why you couldn’t add a few dashes of angostura bitters to really emulate the classic tipple.

How to make Orange and Whiskey Mincemeat

Although there’s a few ingredients required, the process for this recipe couldn’t be simpler. Essentially, you add all the ingredients apart from the whiskey in a pan and cook over a low heat for 10 minutes until the suet and sugar have dissolved, then remove from the heat and stir in the whiskey. I like to add an extra little slug of whiskey just to be on the safe side but this is entirely optional. It may look a little runny once you’ve added the whiskey, but it will thicken as it cools.

The reason I go for the cooking method is that I prefer the slightly juicier mince that results – the suet melts and coats the fruit and the apple cooks down a little. It’ll still hold its shape in a mince pie, but it’s ever so slightly more saucy. That said, you could just bung everything in a bowl and cover with a tea towel for 24 hours, stirring occasionally, but this method is better if you have a few weeks before you plan to use the mincemeat. The cooking method also benefits from being left to mature before use, but is still delicious if used straight away.

To store your mincemeat, you’ll need some glass jars. Kilner jars or old jam jars are ideal. The quantities in this recipe make just over 1kg mincemeat, so 2 or 3 jars should do it, depending on their size. To sterilize them, you can either run them through a hot cycle in your dishwasher, or wash them in warm, soapy water, rinse them, and dry them in an oven heated to 100C for 15 minutes. While the jars are still hot, pack the hot mincemeat into them, and allow them to cool with the lids firmly screwed on. If properly sterilized the mincemeat can keep like this in the cupboard for months, and another month or so in the fridge once you’ve opened a jar.

Please let me know if you give this a try! I would love to hear what you think of it – any feedback is really appreciated! You can comment below or tag me on Instagram or Twitter @greedybearbakes. 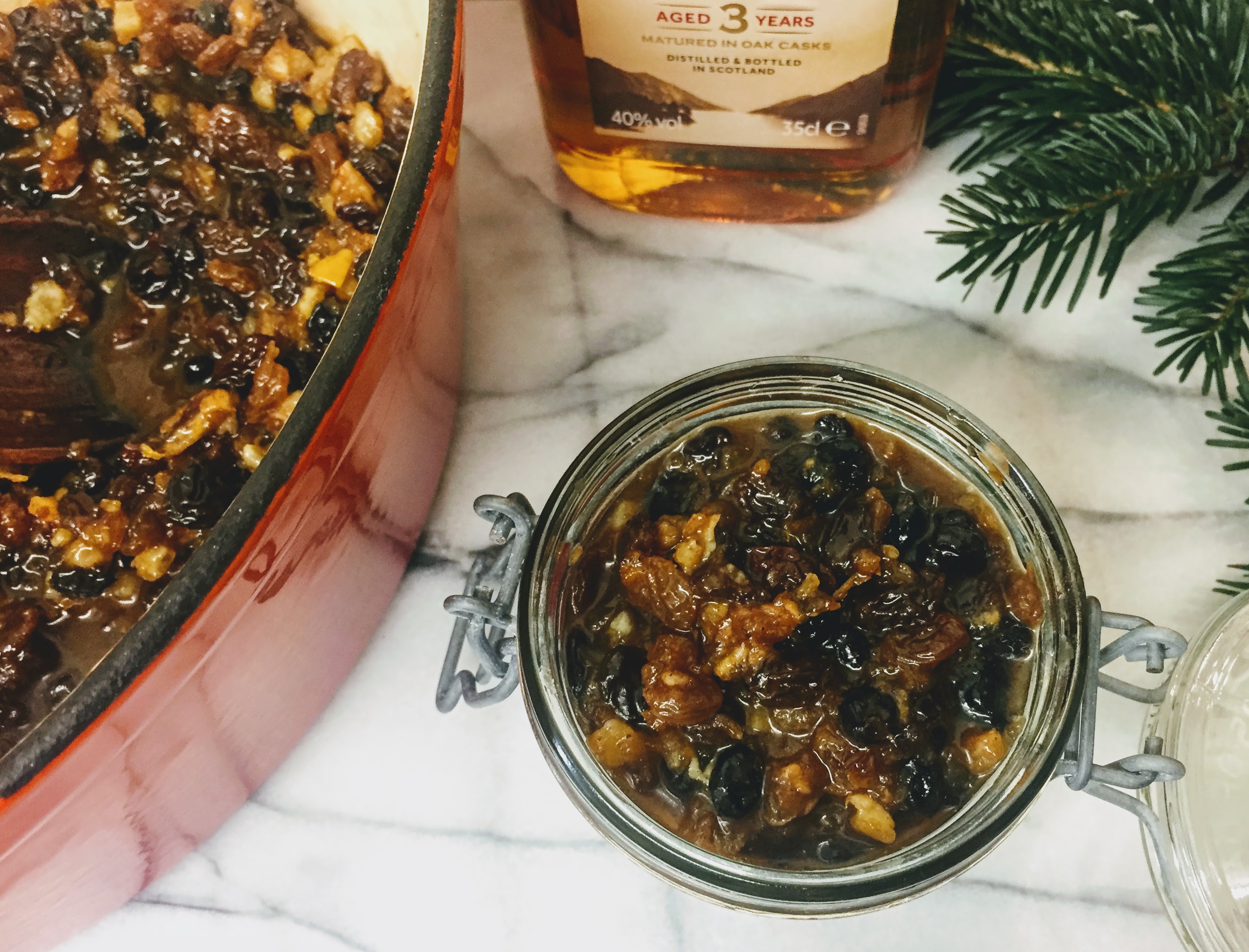 This mincemeat is bursting with fruit, fragranced with orange zest, spiced with cinnamon and nutmeg, and has a warming, boozy kick of whiskey