If you were to ask someone what they considered to be ‘appetizing’, I’m not sure that this smooth, plain, anaemic blob would be the first thing that came to mind. And yet for me, these buns are the height of temptation. I have never seen one of these and not wanted to immediately sink my teeth into it, and regardless of the filling, that initial soft and buoyant bite has never disappointed.

In the UK, when people think of bao, most would think of the folded variety stuffed with savoury delights. But these are only one of a whole variety of steamed treats that come under the bao umbrella. They originated in China but have been adopted by many other South East Asian countries. In Japanese cartoons, I would often see characters snacking on these round, filled versions, and I was fascinated by them before I knew what they were – somehow even the animated versions seemed deeply desirable.

Classic fillings for this variety of bao include minced pork, or egg custard, neither of which are very vegan. And then when I was thinking about how much I want to eat bao (which happens often) and then also thinking about how wonderful chocolate is (which also happens often), I dared to dream that it would be possible to combine the two. (SPOILER ALERT: it is possible and now it’s the only thing I want to eat).

The dough is exactly the same as for savoury bao, except with a little more sugar. Simply add a pinch of the sugar and yeast to warmed water and non-dairy milk, and leave aside so the yeast can activate, while you measure out the dry ingredients; flour, salt and bicarbonate of soda. Everything then gets mixed together and kneaded for around 5 mins until you have a smooth and elastic dough. Cover with a damp cloth and leave to prove for 90 mins, or until doubled in size.

The chocolate filling is incredibly easy but requires a little fridge time to set. I make it as soon as the dough has started its first prove so it gets at least an hour in the fridge. You’re essentially making a vegan chocolate ganache which requires a grand total of three ingredients; dark chocolate, non-dairy milk and a pinch of salt. It’s up to you what sort of dark chocolate you use, however, given that the dough is reasonably savoury, I prefer to use a chocolate with a lower cocoa and higher sugar content. Something around 50-60% cocoa solids is ideal for me, but you can go sweeter with something like Cadbury’s Bourneville, or darker with a 70 or 85% dark chocolate. It’s much better to vary the sweetness of the chocolate rather than adding sugar or syrup to the ganache, as this can cause it to split.

Whatever chocolate you chose, chop it very finely and place in a heat-proof bowl. Warm your non-dairy milk in a small saucepan over a medium heat. You want the milk to be hot but not boiling. When there’s plenty of steam rising from the milk, pour it over the chopped chocolate and leave it, undisturbed, for 5 minutes. Then stir with a whisk or spoon until you have a thick and glossy chocolate sauce, and add a pinch of salt to taste. If there are still some lumps of chocolate, you can blast in the microwave for 10 seconds at a time and stir thoroughly until they have all melted. Then place in the fridge – the chocolate will firm up much quicker if spread over a greater surface area; a small casserole dish or shallow bowl is ideal.

Once the dough has doubled in size, it’s time to shape the bao. I make sure I have cut out 16 squares of baking paper (7 or 8 cm squared) and have a baking tray and clean tea towel ready, as well as a small bowl of water, a knife, a rolling pin, the ganache from the fridge, a tablespoon measure, and a clean damp cloth. Tip the dough onto a lightly floured surface and knock out the air, then cut the dough into two equal pieces, and each piece in half again. Place three pieces back in the proving bowl under the damp cloth, and roll the fourth into a sausage shape. Score with the knife into four equal pieces, and separate each section with your hands (this will make it easier to roll each piece into a ball than if you use the knife). I’d recommend keeping everything except the piece of dough you are working on under a damp cloth; it will prevent the dough from drying out and makes it easier to work with.

With each small piece of dough, roll it into a ball and flatten slightly with the palm of your hand. Roll into a small circle with the rolling pin (roll the centre of the dough out leaving the top and bottom a little thicker, then turn 45 degrees and do the same, and repeat until you have a circle). Then go around the edge of the circle with the rolling pin, rolling out the edges and leaving a thicker disc in the middle; a bit like a fried egg. Scoop a level tablespoon of ganache and place in the middle of the dough, then lift the entire thing into the palm of one hand and pleat the edges around the ganache with the other.

Finally, dab a tiny amount of water on the edge of the pleats, and bring them together by twisting them slightly in the direction the pleats are going (e.g. on the bun in the pictures I would twist it anti-clockwise). Often my pleats will look like a complete mess and then when I twist them slightly they suddenly look competent, but they won’t be on show so you needn’t worry about getting them perfect. If there’s still a little gap it doesn’t matter – it will close as it steams. Place pleat-side down on a square of baking paper on your baking tray, cover with a clean tea towel, and repeat with the remaining dough.

The shaped buns need to be left for another 30 minutes so they get a little more puffy before they are steamed. As the shaping and pleating is a little time consuming, I time them from when then first six are shaped (six being the number I can fit in my steamer at any one time). I use a three tier metal steamer, as this is what I have already, but the bamboo ones are also brilliant and and inexpensive. After 30 minutes, get the water in the bottom of your steamer to boiling point, reduce to a medium heat and then steam the first batch, still on their baking paper squares, for 8 minutes. You’ll know they’re done if you poke them gently and they spring back immediately.

Transfer to a wire rack to cool – you’ll need to remove them from the baking paper so the bottoms don’t get soggy, but keep the squares aside. Repeat with the remaining buns.

You can eat them immediately, while the ganache in the center is still warm and oozing, or keep them in an airtight container for a day or two. However, one of the many things I love about bao is how well they freeze. Any buns that you can resist eating straight away can be frozen, then re-steamed and devoured, with indistinguishable pleasure, at a later date. Simply return the buns to their baking paper squares and flash freeze for an hour (i.e. place them on a baking tray or cooling rack directly in the freezer), then bag them up. Then whenever you want a squishy, chewy, chocolately treat, steam from frozen for 5–6 minutes.

Once you’ve got the hang of the shaping and pleating, these are really quite straight forward to make, which is a worrying discovery as I will likely be making a lot of them. There are many many fillings you could try out and I have numerous ideas that I want to try in the coming weeks – keep a look out for future posts!

Please let me know if you give these a try! I would love to hear how you get on. You can comment below or find me on Instagram and Twitter @greedybearbakes. 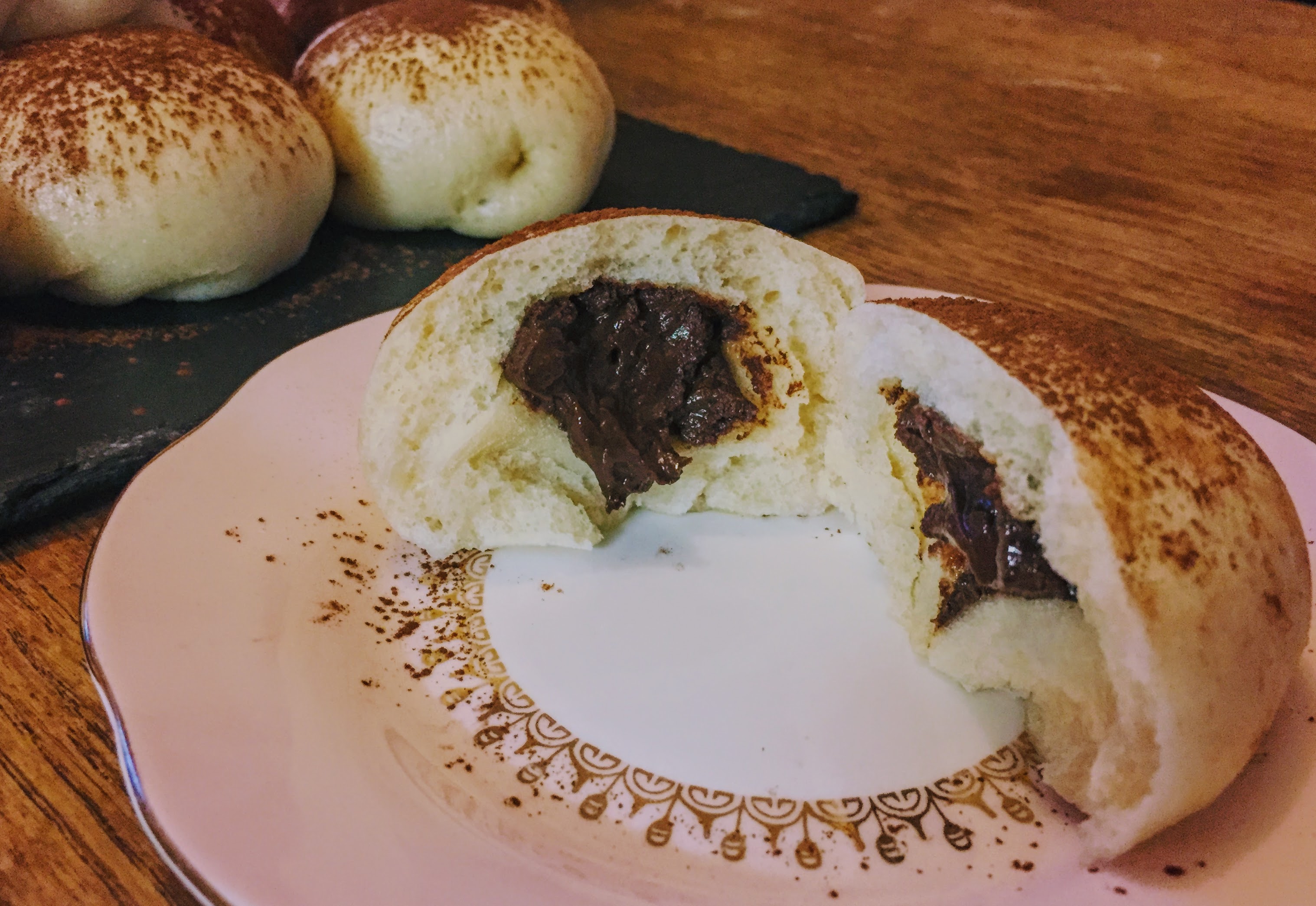 *I prefer using a dark chocolate that’s between 50% and 60% cocoa solids, as this adds a little more sweetness to the ganache. If you prefer a more bitter chocolate flavour you can go for something in the 70-85% bracket, or for a sweeter ganache you could use something like Cadbury’s Bourneville which is under 40%. It’s better to vary the sweetness with the type of chocolate you use, as adding sugar or syrup can split the ganache.