I’m struggling to write this blog because I keep looking at pictures of cheesecake and thinking about how I wish I had cheesecake now, and when I can next find an excuse to make cheesecake (Happy Thursday, anyone?). When I first decided to go vegan I assumed that really good cheesecake would be one of the things I had to do without – I had tried versions made predominantly from cashews and dates, and while they were nice enough, they tasted largely of cashews and dates, which didn’t really scratch my cheesecake itch.

The pivotal moment which changed my life forever (at least my life in terms of cheesecake satisfaction levels), came when I discovered that Sainsbury’s ‘free-from’ white chocolate was vegan, super cheap and beautifully melt-able (£1.10 for 100g at time of writing). And given that white chocolate is not only delicious, but also largely sugar and cocoa butter, I wondered if it might add an extra level of creaminess and flavour to more traditional vegan cheesecake ingredients (SPOILER ALERT: I was right). You could use any vegan white chocolate but a lot of brands are very expensive – Asda and Tesco also have white chocolate in their ‘free-from’ ranges which are perfectly fine; they are also inexpensive but sold in much smaller quantities (25g bags of buttons and 35g bars).

This is not the simplest of cheesecake recipes but the mixture of ingredients ensures that no one thing dominates, and the end result is silky smooth, sumptuously creamy, and with a sweetness that is perfectly balanced with tanginess and the tiniest hint of salt. It is very easy to start eating and very difficult to stop.

The base is a classic cheesecake combo of biscuits and vegan butter. A lot of cheaper biscuits are accidentally vegan, especially supermarket own-brands. I really like using Hobnobs (or some sort of oat-y biscuit equivalent) and McVities now do a gluten-free version. Digestives also work really well, and I’ve made a version of this recipe with ginger snaps which was delicious. For the butter I use Naturli Vegan Block which is an incredible vegan butter alternative (available at Sainsbury’s and some health food stores) but you could use any vegan spread or even coconut oil.

You can see from the photo above that the base is quite substantial. This is personal preference rather than necessity, and if you prefer a thinner base, reduce the quantity of biscuits and butter by one third. Either way, all you need to do is whizz the biscuits in a food processor, then add the butter and whizz some more until the mixture starts to clump together, then press into the bottom of a 20 cm cake tin and refrigerate.

The cheesecake filling is made from a combination of cashews and silken tofu. Cashews have a mild, sweet flavour and are deliciously fatty – they are often used as a vegan dairy replacement in creamy sauces and puddings. Once they have been soaked in water for a few hours they can be blended with water or milk until perfectly smooth, but when used in large quantities their distinctive taste can be quite noticeable. Silken tofu also becomes delightfully smooth when blended, but has virtually no flavour. It has a high protein content but very little fat so lacks the richness of cashews, but in combination they are perfect for the body of the cheesecake.

Then we come to the flavouring. A lot of the sweetness comes from the white chocolate so you don’t need to add a huge amount of additional sweetener. I prefer using syrup to sugar for textural purposes, and agave, maple, brown rice, or golden syrup all work well. Then to add some tang – this is important for two reasons; firstly to cut through the sweetness of the cheesecake so it’s not too sickly, and secondly to mimic the slight sourness that would otherwise be provided by dairy products. For this I use vegan yogurt (soya or coconut are both fine), lemon juice, and apple cider vinegar. And again the reason I use both lemon juice and apple cider vinegar for a little acidic hit is so neither flavour dominates. If you want a lemon cheesecake, which also goes wonderfully well with blueberries, I’ve provided instructions in the notes below the recipe.

To make the filling you need to soak the cashews in cold water for 4–6 hours (or overnight), or in boiled water for 1 hour, or if you’ve completely forgotten about this step you can boil the cashews in water for 15 minutes. If you have a high-speed blender then any of these methods are fine, however if you only have a food processor or standard blender, the longer the soak the smoother the results.

The white chocolate needs to be melted and left to cool, and is the last ingredient to be added. The silken tofu needs to be squeezed to remove most of the liquid; you can do this by wrapping it in a clean tea towel or cloth and squeezing firmly over a sink until hardly any liquid is released, and can then be added to the food processor and blended until smooth. If you have a high-speed blender, add the cashews and any liquid ingredients and blitz until smooth, then combine with the tofu. Otherwise you can put everything in the food processor (minus the white chocolate) and whizz until smooth – this can take up to 5 minutes and you’ll need to scrap the sides of the bowl down every so often.

Finally, with the motor of the food processor running, stream in the melted white chocolate. You’ll see the mixture thicken slightly and become beautifully velvet. Taste and add a little more syrup, lemon juice, or salt, if you think it’s necessary, then pour onto the refrigerated cheesecake base. Spread so that the mixture is level, then bake at 170C for 35 minutes. Do not open the door, but turn off the oven and leave the cheesecake to cool for an hour or so (this prevents the top of the cheesecake from splitting). Then remove from the oven and cool to room temperature before refrigerating overnight, or for at least 4 hours, before removing from the tin.

The final step is the sweet, sharp and darkly delicious blueberry sauce. You could use any soft berries – I’ve made this with raspberries before and it would work really well with strawberries or even gooseberries, but you will need to adjust the lemon juice and sugar accordingly. It’s really quick to whip up; simply put 100g fresh or frozen blueberries in a saucepan with 1 tbsp of lemon juice and 1–2 tbsp sugar. Bring to the boil over a medium heat, then reduce the heat to medium–low until the berries have almost entirely disintegrated (about 5 minutes). Leave to cool slightly, then blend (you could use a food processor, or a high speed, stick, or regular blender) and sieve to remove any bits of skin or seeds.

Once fully cooled, pour the sauce in the centre of the cheesecake and slowly spread towards the outer edges. The cheesecake will have sunk ever so slightly leaving a lip around the edge, so it’s quite easy to get a neat circle of sauce. Adorn with fresh berries, and, if you are fortunate to have a garden and some green fingered-family members, some edible flowers (I used borage) for guaranteed instagram likes.

If you make this recipe I would love to know how you get on! You can comment below, or tag me on instagram @greedybearbakes. 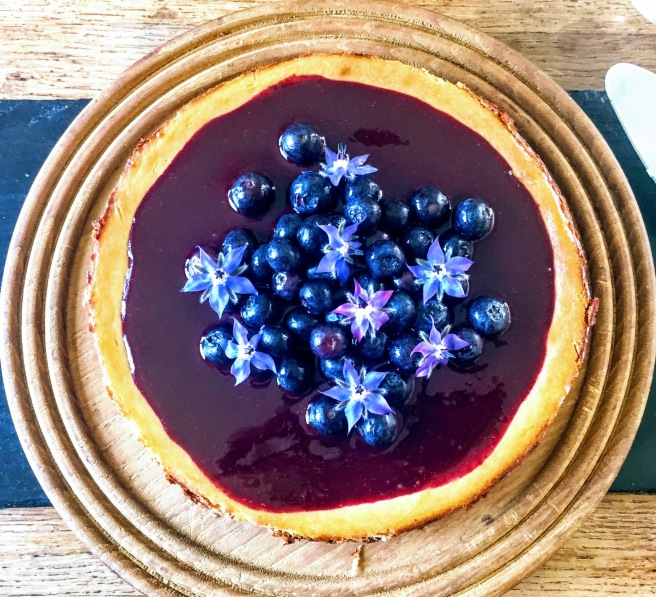 A sweet and velvety vegan white chocolate cheesecake, with a crumbly biscuit base and tangy blueberry sauce

*Most cheaper supermarket biscuits are accidentally vegan. Any oaty biscuits or digestive-style biscuits would work well.

***You could use any other sort of soft berry but you may need to adjust the lemon juice and sugar depending on how tart they are. Raspberries, strawberries, cherries or gooseberries would all work well.